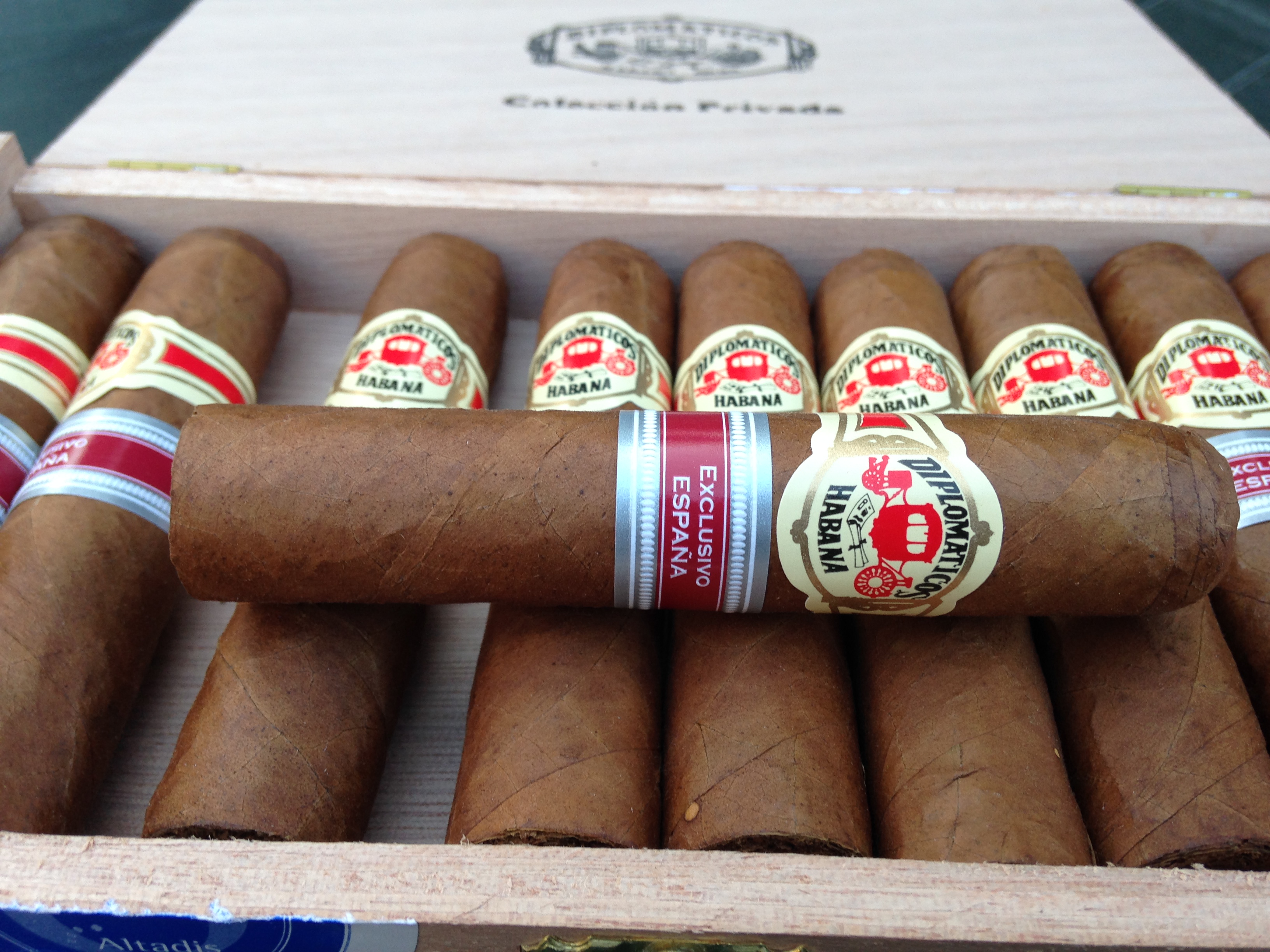 Today, we had the opportunity to to indulge in one of our favourite cigar past-times. Smoking regional editions from around the world. Whilst we were out in Palma de Mallorca reviewing Purobeach and Puro Hotel we managed to visit some of the local estanco’s (tobacconists) in the city in search of the Exclusivo España’s. After hearing many good things of the Diplomaticos Coleccion Privada, this became our mission. And mission impossible at that. Having spent an entire day travelling from tobacconist to tobacconist, we found just one that still had stock. Box number 4954 of 5000. This was probably one of the last in the country.

Diplomaticos was the first new Cuban cigar brand introduced post-revolution to be sold to the public in 1966. It was initially supposed to be a more affordable alternative to the Montecristo brand and both bare many similarities. Today, both use a similar blend and are almost identical in price.

The Coleccion Privada was the Diplomaticos brand’s first regional edition and it is exclusive to Spain. It is in the Petit Robusto form at 4″ long and with a 50 ring gauge. It’s a short 30 minute smoke so for our review we’ve decided to discuss the cigars first half and second half as opposed to our usual format of splitting it in to thirds.

Upon inspection, the cigar has a nice firm feel. There’s some bounce but perhaps not as much as the longer cigars. They’re really trying to pack in as much as possible in to this little stogie. The wrapper is a nice light brown colour although in our opinions is not the prettiest cigar to look at. There’s a few veins, some quite accentuated by a little jaggedness on the wrapper as you will see in the video below.

There’s a light cedar aroma to the cigar pre-light. It’s quite a pleasing aroma largely due to it’s lightness. You can sit there enjoying the cedar for quite some time before you actually remember to light one. Perhaps a good idea if you do get your hands on some too, as they seem to be running out of stock just about everywhere. The pre-light draw is very similar.

Upon lighting the cigar, the light cedar is the only thing coming through. The draw is loose and makes it a very easy smoke. We can imagine our fellow BOTL in spain relaxing in a terrace somewhere in the sun with one of these, having a lazy day. The cedar continues and seems to build in strength in a very subtle manner. We can’t imagine having enjoyed the flavour as much had it been stronger and would probably say the cedar holds a perfect weighting against the medium smoke and light draw.

Moving closer to the 2nd half, a sweet vanilla aftertaste develops which was a really nice development. It becomes almost like a dessert after the main meal. The cedar aroma’s grow and starts to move a little more to being a medium which works great as the sweet aftertaste never dominates the pleasantness of the cedar. The flavours then stay consistent to the end as you’d expect from such a small cigar.

Overall, we have to say this is one of the better cigars we’ve had the pleasure of smoking and does every bit of justice to the exclusivity it holds. You can clearly see the reason why these are so high in demand and so few in supply. At any chance we’d get we’d pick up as many boxes as were available when you consider these great short smokes are sold at a mere €67.50 for a box of 10.

Check out our images and video below and don’t forget to let us know your thoughts on the Diplomaticos Coleccion Privada Exclusivo España.