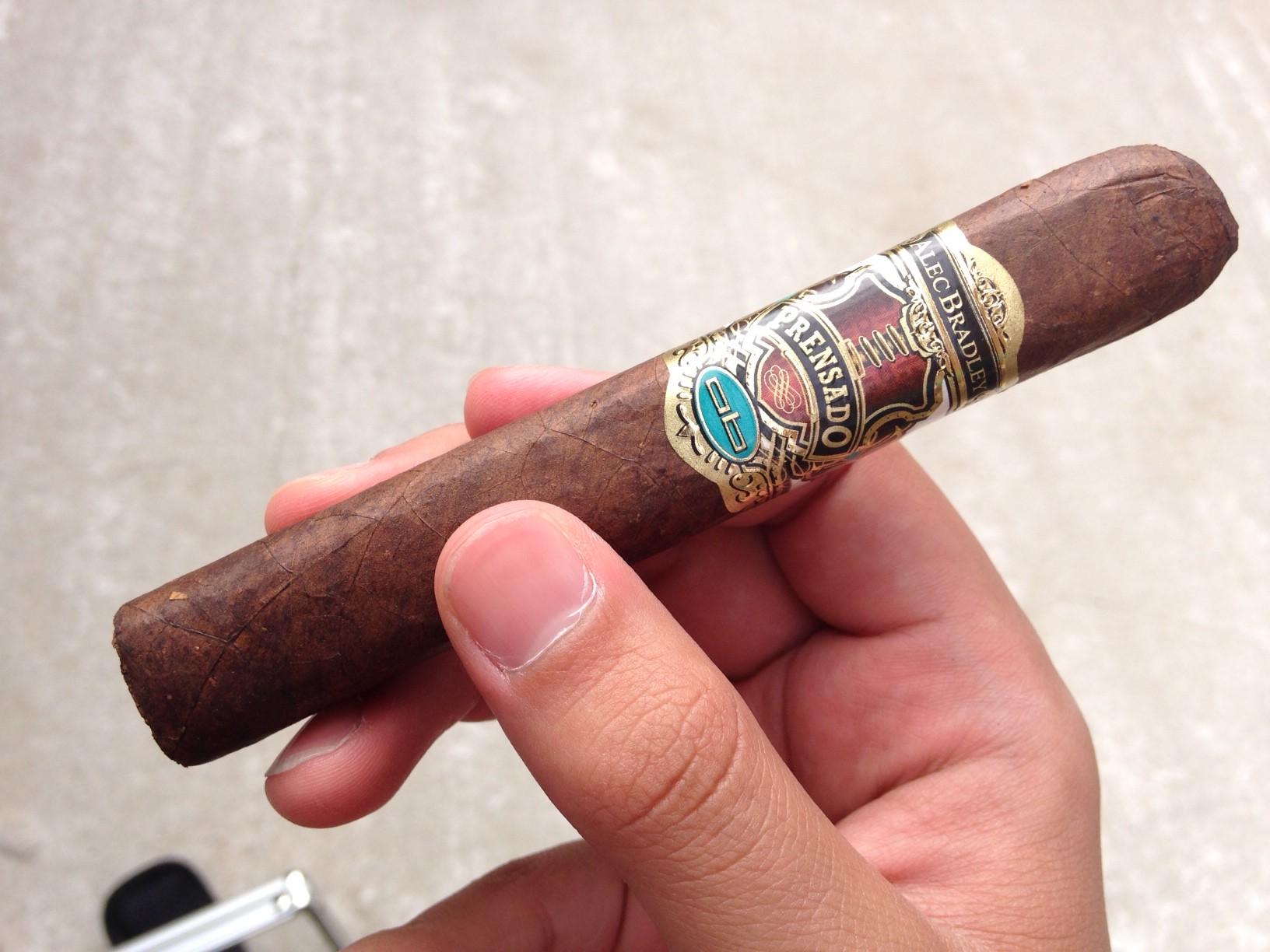 Like most people here in London, we’ve been making the most of the good weather by enjoying the great outdoors as much as we can while it lasts. Unlike many other European cities, the weather here is known to be a little…unpredictable to say the least. In April, we had some sun, some rain, and some snow all in the same week so it makes sense to make the most of good weather whenever we can. One of the cigars we’ve had the pleasure of smoking during our time in the sun has been the Alec Bradley Prensado Robusto.

Alec Bradley Cigar Company was set up in 1996 by Alan Rubin to pursue his passion; cigars. The best reason we can think of for ever entering the cigar industry, or any for that matter, is to do something you are passionate about. And since its launch, Mr Rubin’s passion, and his business excellence has propelled the Alec Bradley brand in to one of the most popular non-Cuban cigar brands in the world today.Alec Bradley cigars are relatively new to this side of the Atlantic. We’ve only seen them in stock at our retailers over the past couple of years and are now becoming more and more popular with British BOTL due to their lower price point and, despite the lower cost compared to Cuban cigars, high quality and great flavours.

Some of you (we hope all) would have read our Alec Bradley Black Market Robusto review a while back. The Prensado range is a completely different blend and one of the stand-out range’s by the Alec Bradley house. It’s most notable conquest to date (and what an achievement, if we must say so ourselves) was when the Alec Bradley Prensado Churchill won Cigar Afficionado’s Cigar of the Year 2011 with a remarkable 96 points. The Robusto uses the same blend, but in robusto form as opposed to the Churchill’s Romeo No. 2 size which is also commonly known as the churchill size (hence the name). The cigars are constructed of Honduran corojo wrapper, Nicaraguan binder and a blend of both Honduran and Nicaraguan filler.

The Alec Bradley Prensado’s are sold in boxes of 20, and can be found at some retailers in single’s as a sample stick so you don’t have to take our word for it. Pick up a stick and try it out. In the boxes, the cigars are individually cellophane-wrapped and have a slight box press to them. Taking one of of its cellophane, the wrapper has a nice reddish brown colour with a lovely sheen from the wrappers natural oils. There’s a couple of prominent veins as you’ll see in the pictures and video we’ve posted below. There’s a nice firm feel to the stogie and the box-press makes it quite comfortable to hold in-between your fingers.
Pre-light, there’s a subtle spice to the draw with some earthy undertones.

Upon lighting, unlike many cigars making their way from stateside, the smoke is quite light and there’s a smooth easy draw. Unfortunately, the burn does take a slightly miscued direction on the different sides despite toasting the foot well. The flavours coming through are mainly tobacco with a hint of cocoa, followed by the same light spices we had pre-light. It should be noted that the flavour is very light.
In to the second-third, there light flavour continued and developed a coffee undertone. very light yet still quite pleasing.
Moving through to the last third, there isn’t a great deal of development. The cocoa makes way as does the coffee for a light tobacco aroma.

Looking back, we were pleased with the flavours present but there isn’t really enough there to make it our go-to cigar. However, we’d definitely keep a couple sticks in the humidor perhaps as an aperitif to a stronger cigar if we were planning to have a daytime smoke followed on by something with a little more substance. The cigar is definitely one of high quality, and definitely a good ambassador to non-Cuban cigars. It’s by far one of the better of Honduran cigars compared to others we can find in the UK like Don Ramos and La Invicta. But you are paying more for the pleasure.