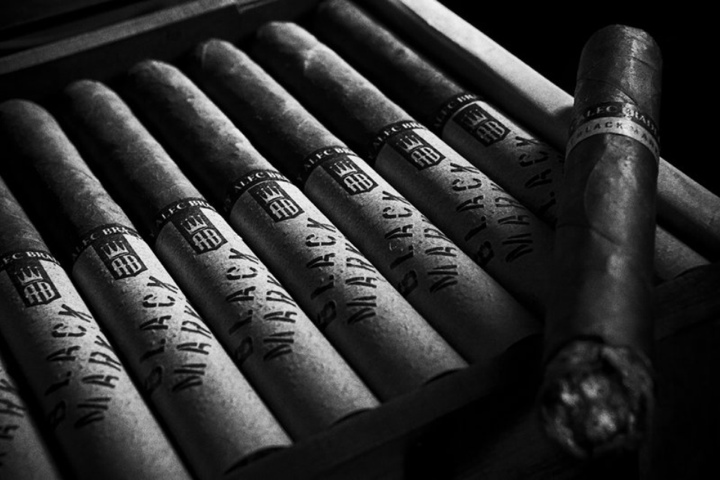 Ladies and gentleman, Alec Bradley cigars need no introduction. Most of you will already know of the brand quite well as one of the top non-cuban cigar manufacturers, and those who didn’t would undoubtedly have heard of them when Cigar Aficionado voted the Alec Bradley Prensado Churchill as the Cigar of the Year 2011.

This week, we were kindly provided with an Alec Bradley Black Market Robusto to review for all our fellow BOTL and we were pleased to do so. It’s a tough job, but someone’s got to do it.

One of the things we love about the cigars aimed at the American market is the branding and the image. So hugely different it is from the Cuban’s, you could say it is aimed at a completely different cigar smoker altogether. The Alec Bradley Black Market range is no different. We’re not entirely sure whether AB were playing on the black market for cuban cigars, or whether the entire Black Market idea has something to do with other contraband goods. All we know is we love the idea. The cigars come packaged in a wooden crate style box which almost looks like it should open up some heavy firearms. Open the box, and you’re not disappointed. This baby is packing heat. Twenty-two sticks of dark Nicaraguan wrapper which is covering Sumatran binder, and a blend of Panamanian and Honduran filler leaves which look too good to smoke. The stogies are presented in a thick paper cover up to the cigar band with the Alec Bradley ‘AB’ logo, and ‘Black Market’ in a classified-type font fitting nicely with the branding. So far, so good. It talks the talk. Let’s see if it walks the walk.

After gently removing the paper cover, the beauty of the dark Nicaraguan wrapper really starts to show it’s full effect. Contrary to common perception, the wrapper leaf lends very few points to the flavour of a cigar. But what it does do, it does well. The purpose of the wrapper is to make the cigar look appealing. After all, that will have some input in to your perception of the taste. If it looks good, you’ll enjoy smoking it more. The wrapper of the Black Market is a rich dark colour, but not as dark as Maduro leaves. It’s a chocolatey brown shade with just a touch of oils to give it a nice gleam. The cigar feels nice and heavy to hold. The only worry inspecting the feel of the cigar was that it was very tightly packed. This could have some influence on the draw. A pre-light smell of the cigar and there’s a nice strong peppermint aroma which was a nice development from the usually more spicy Nicaraguan leaves.

When cut, the draw is slightly looser than expected compared to how tightly rolled the cigar is but definitely tighter than your usual Robusto.

Upon lighting the cigar, there is a nice strong peppery flavour to this cigar. It really kicks in straight from the first light but there’s also a nice creaminess to the smoke and the two compliment each other well, with the creaminess helping to subdue the peppery notes.

Going through the cigars 1st third, the peppery notes really start to ease off and a tobacco flavour starts to underline it. The creaminess continues to accompany the two flavours with a sophisticated smoothness but does not seem to develop much from there. It remains pretty constant and it makes the cigar great for pairing with drinks because of the simplicity of the flavour profile. We’d highly recommend a nice coffee, a clear rum, or an XO cognac with this.

Right through to the end, we really liked the Alec Bradley Black Market. It’s definitely not at the top with our favourites, but it’s definitely a box we’d keep in the humidor. The reasoning is very simple. Yes, the cigar is an enjoyable smoke. But equally as important at £9.00 a stick (£198.50 a box) at our friends Cigar-Club.com (click to go to website) the Black Market Robusto is £5.00 cheaper a stick than the Partagas Serie D No.4 and £6.00 cheaper than the Montecristo Open Master whilst being a slightly larger stogie. The value you get for these cigars simply can not be beaten.