Two things we love here at Cut The Cap are Rum and having a good time, so when we heard there was a watch being created featuring some of the world’s most expensive rum, we couldn’t help but find out more.

Forbes.com reported that Wealth Solutions have announced that they are continuing their line of Spirit Watches Collection — and brought in independent watchmaker, Peter Speake-Marin to create the new rum watch. 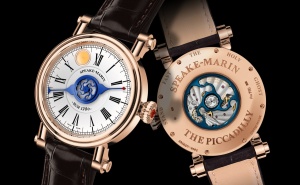 The Peter Speake-Marin Rum Watch will house a drop of one of the world’s oldest rums — in a capsule that will reside within the watch and be visible on the dial.
The alcohol used in the watch is a drop of 1780 Harewood Rum, which was found in a basement corner of the Harewood country house.

The bottles date back to 1780 and were initially valued at approximately £800, however as expected at auction they actually sold for up to six times that amount.

Wealth Solutions purchased a bottle of Light Harewood Rum from Hedonism Wines of London for about $17,350 and used drop to create the Peter Speake-Marin Rum Watch.

If you have a spare £12,000 why not pick yourself up a watch and take some of the world’s most expensive rum wherever you go.

Find out more at Speake Marin’s Website. (Be warned: you will be tempted…if you aren’t already)