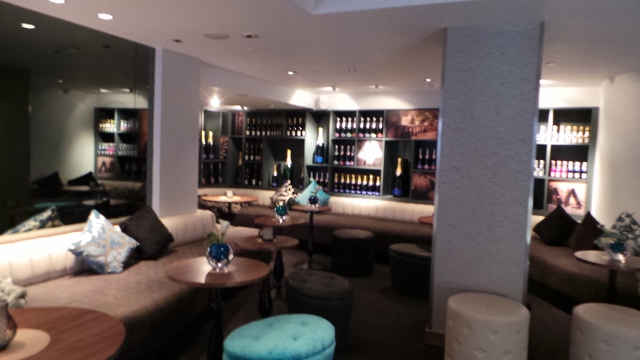 Whilst there are many watering holes in London, few can be called an oasis. It’s these few oases where the establishment’s design, drinks, service, and quality that we here at Cut The Cap deem worthy enough to bring to the attention of our readers.

This week, we were lucky enough to be invited to Voltaire Bar, in the basement of The Crowne Plaza The City hotel opposite Blackfriars station which is set in a grade II listed building. The bar which takes its name from French writer François-Marie Arouet who was better known as Voltaire shares its philosophy with the words of the writer, “it is not enough to conquer; one must seduce”. How does one seduce the already spoilt clientele of London? We found out.

Whilst the bar itself is in the basement of The Crowne Plaza The City hotel, there is a completely seperate entrace to the bar via a staircase from the street. The stairs lead you down in to a terrace where the magic begins. There’s an understated class about the way the terrace area is set. Modern outdoor chandeliers hang above as if suspended in mid-air making you feel less as if you’re in an outdoor space but more as though you’re indoors with the added benefit of clean air. The plentiful heaters supplement that indoor feeling and you never really feel the weather outside is quite as cold as it is. Being a floor below street level helps by the surroundings blocking out the biting chill of the wind.

All across the terrace, understated steel bar stools painted in white run along a counter that’s deep enough to accommodate more than just drinks. We can see our ideal Lunch break here already as there’s enough space for drinks, a full meal complete with sides, and whatever else takes your fancy. The after-work crowd can have a round of drinks and their variety of bar snacks with no problem.

So many great things to say JUST about the terrace and we haven’t even got to the showpiece yet. Vaults! The wall opposite the building on the terrace is home to something we’ve never seen done, let alone done so well. Running along this wall are 9 vaults built in to the wall that once were prison cells and then bank vaults by the buildings previous occupiers. Voltaire Bar has transformed these in to cosy grotto’s where one can escape the busy bar for some private space.

Each vault has a table and cushioned benches going around the table big enough for between 2 to 10 guests and its own private iPod dock and speakers. We were initially sceptical of the usefulness of an iPod dock in a bar that has its own music playing through much more powerful speakers. However, the secludedness of the vaults really help and once we tried our iPhone out, we were surprised by the fact that the only thing you’ll hear is your own music (and of course the chitter chatter of your group of guests). It’s also worth pointing out that in the larger vaults, the entrance is narrower than the space you have inside so you feel much more as though you are in your own private space.

The interior of the bar is just as well-designed as the exterior. An extremely long bar almost covers the entire length of the inside, with an extensive range of drinks behind it to match the grandeur. In one corner of Voltaire, there’s a Pommery Champagne library. This really does deserve to be called a library, more than a collection. Voltaire houses the most extensive collection of Pommery champagne from the budget friendly Pommery Brut NV to the Pommery Cuvée Louise Brut 1990. There’s even a collection of the Pommery Pop range including the Pop Voltaire, exclusively made for Voltaire Bar. And just in case there isn’t anything to take your fancy in the Pommery range (crazy talk, we know), there’s also a fine range of other champagnes including Laurent Perrier, Dom Perignon, and the classic Louis Roederer Cristal.

One of our favourite parts of the interior of Voltaire is the stunning humidor. An all-glass fronted cabinet which is illuminated with two cigar units either side of a champagne fridge. The humidor holds a good variety of stogies. Certainly one for just about everybody. Aside from the usual cubans, we also found a pleasing selection of non-cubans from the finest Alec Bradley’s, to the prestigious Padron cigars amongst others. This was particularly pleasing as it is very difficult to get hold of non-cubans in London, let alone Padron’s. And perhaps one of the most important aspect to note about the prices is…the mark-up. We’re very pleased that Voltaire has decided not to charge particularly more than the dedicated cigar shops. This makes the venue more suitable to go to on a more regular basis rather than just the occasional treat. It can be your weekly retreat to a cigar terrace after a hard week or a spontaneous trip if you have a spare hour or two without feeling guilty.

With the great humidor and the terrace, Voltaire are also holding regular cigar tasting events. These are great not only if you’re a seasoned cigar pro, but also for those looking to build up their knowledge and develop their palet. Last month’s Vestal Vodka and the now discontinued Trinidad Robustos Extra was one of our favourite’s for two reasons. Firstly, we never knew vodka could have such a deep flavour profile enough to compliment a cigar. Secondly, it was a rare treat that we get to ‘sample’ a cigar that has now been discontinued. Luckily Hunters & Frankau, the UK’s sole distributors of Cuban cigars, hold a two-year stock of all cigars and we’re not sure about others but we’d like to enjoy these great stogies as much as possible before we start having to sell a kidney to get hold of one.

Looking back at our visit to Voltaire Bar, overall we’re really quite pleased with the new spot for cigar lovers. Especially considering the lack of similar places within the EC postcodes. We now have a great new bar, as well as a unique cigar terrace in East Central. We no longer have to make the sardine-packed train journey across to the west end. We no longer have to sit in traffic for 45 minutes for what is essentially a 5 minute journey. And we no longer have to make the decision which one of those torturous modes it will be. Perhaps from now, it’ll be the west-end crowd making their way to EC for a world-class cigar terrace? We cerainly could see it happening.