The rumours have been doing the rounds for a while now and now its official; Scarface will be remade.

Before everyone runs to social media to express their distaste in this news, it should be pointed out that the classic 80s Scarface starring Al Pacino as cigar smoking ‘Political Refugee from Cuba ’Tony Montana was in fact a remake in itself. 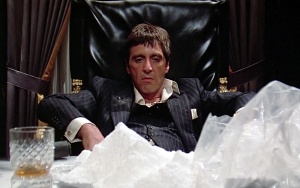 The original Scarface was released in 1932 starring Paul Mumi as Tony, a Chicago mobster.

The theme that ties these films together is the rags to riches story and it is rumoured this film will up roots from Miami and move to LA following an up and coming gangster in present day.

We just hope there is a catchy montage like this:

Straight Outta Compton writer Jonathan Herman has been drafted into rewrite the script with direction coming from Pablo Larrain.

We will report in as soon as we hear more but just be aware it’s coming and “I always tell the truth….even when I lie”