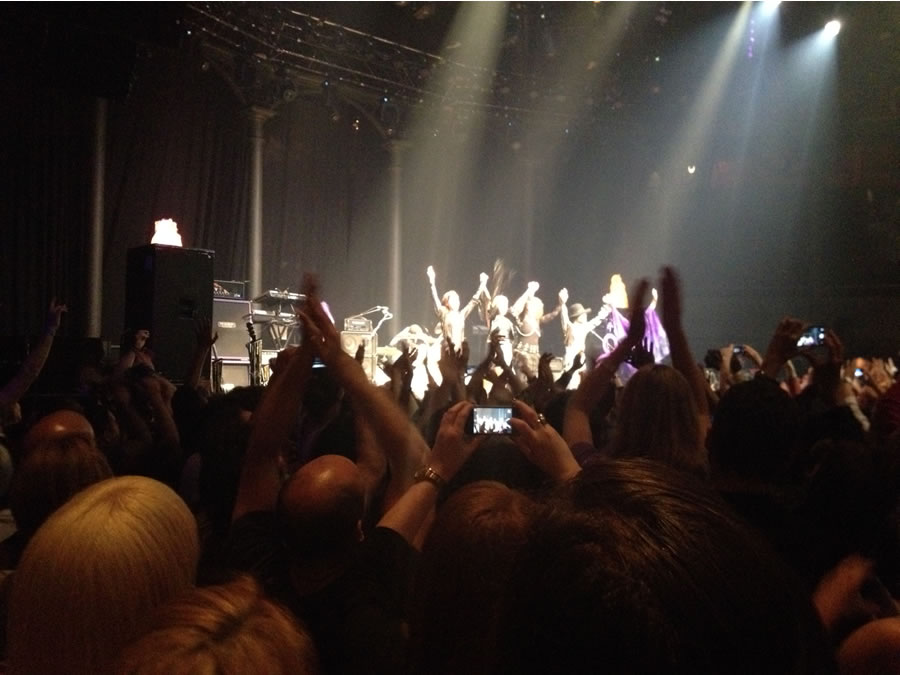 This week we were privileged to be amongst a lucky few that managed to get tickets to one of Prince’s intimate London gigs.

As we frantically hit refresh on Ticketmaster’s website we can’t help but feel overcome with joy that we managed to make it through and was able to book 2 tickets to the 9.30 gig Prince was doing.

We dusted off the crushed velvet catsuit and went on our merry way to the Roundhouse in Camden for what we knew was going to be a very memorable night and a tick off the bucket list.

Having seen Prince before at his 3121 tour we knew what to expect and having that concert as our top 3 favourite concerts of all time (that good) we were very excited.

We arrived in Camden early making a stop at Cottons Rum Shack (naturally) to sip some fantastic rum Old Fashioned cocktails while we waited.

Prince had two shows that day and we were in for the 2nd at 9.30pm so as we saw everyone leaving the roundhouse grinning from ear to ear we knew we were in for a good time.

Naturally prince is a legend and with that comes a late starting time. The show originally intended for a 9.30 doors open turned into a 9.45 which then turned into a 10.15 meaning we were running behind. We had just enough time to grab a drink and get into the mad max style arena to hear Prince take to the stage for a slowed down version of ‘let’s go crazy’.

From then on the evening had begun.

Like most artists when they reach 50 they begin to slow down on stage, less moving and more asking the crowd to sing along moments. Prince showcased he had no intentions in slowing down as he ripped through a 2 hour set of all his great hits including a personal favourite of ‘Controversy’.

The crowd was filled with a mixture of people all there with for same reason – to see the man, the legend – Prince.

There were so many key moments over the set that were so amazing we couldn’t even describe but highlights were the full length version of purple rain, when does cry and I wanna be your lover.

One thing (and it wasn’t a major thing) was that nobody was allowed to take pictures or use their phones for that matter. In a world where social media, sharing and hashtagging are a key part of our daily routine it was quite hard to resist taking the phone out to snap a pic and boast on social media how much if a great time we were having.

We experienced the seriousness of this enforcement quite early on when we thought we would take some sneaky pics (as you do) and within 2 minutes were escorted to the foyer by security where we were threatened with being kicked out.

We accepted our punishment and security asked us to delete all pics in front of him before being able to re-enter and join the party.

As much as we loved and enjoyed the evening the thought of what happened couldn’t help but bug us the whole night. We as a fan have paid over £80 to see an icon, legend and in some cases role model – so why can we not record images to capture the memories of how much of a good time we were having?

On one hand we can understand that perhaps Prince wants people to enjoy the gig and not watch it behind a phone which we can understand, however is it not the fans that make an artist and artist? And by paying over £80 of our hard earned money which in the current climate can be a lot of money for some people for a gig, Are we not then allowed the right to do whatever we like?

One thought was that perhaps Prince didn’t want any images leaking of his gig, however during his encore he asked the crowd ‘get your motherf**king camera phones out now‘ – so we did:

So what could be the reason for this rash decision? All we know is the constant flashing of torches on people by security did actually ruin the Prince mood slightly and broke our concentration several times. Even if we didn’t have our phones out the constant beaming in our eyes was rather distracting.

It’s like watching a film and someone flashing a torch at you every 5 minutes.

Prince truly is one of the last artists of his generation. A multi-talented artist that can play a range of instruments as well as have a wonderful vocal range to rival any other artist around today.

The set which started late naturally over ran well into 12.30am leaving us without a ride home but we didn’t care, we were in the presence of true greatness and this was a gig we will be telling our grandkids about for years to come.

Prince performed with girl band 3rdEyeGirl which you could see has had the influence of Prince as a mentor. Each member were extremely talented musicians and put on a fantastic show.

If you ever get the chance to see Prince we recommend you never turn the offer down, no matter what the cost (within reason)

At 55 he still has the moves and is no doubt the only man that can pull off a cat suit, heels and costume jewellery.

Prince and 3rdEyeGirl performed at The Roundhouse in London on June 4th at 5.30pm and 9.30pm – a day that will live on in history.

Ps. Sorry to security but we still got photos (not that they were great quality)

Let’s Go Crazy
Take Me With U
Raspberry Beret
U Got The Look incl. I Can’t Stand Myself (When You Touch Me) (instrumental) interpolation
Cool
Kiss
When Doves Cry
Sign O’ The Times
Hot Thing
Controversy
1999
Little Red Corvette
Nothing Compares 2 U
Diamonds And Pearls
The Beautiful Ones
Under The Cherry Moon (instrumental)
Do Me, Baby
I Wanna Be Your Lover
Electric Intercourse (partial rendition)
Purple Rain
The Ride with ‘Butter face’ lyrics
Guitar
Plectrumelectrum
Fixurlifeup
Something In The Water (Does Not Compute)
Funknroll
Stratus incl. The Sailor’s Hornpipe intro
What’s My Name incl. The Sacrifice Of Victor lyrics