It’s a good time to be alive people, that I’m sure of. It might not be perfect but everywhere you look there certainly are pockets of perfection and St.James’ in London is one of them.
Cut the Cap is no stranger to the area of course, with the likes of JJ.Fox and Davidoff adorning the streets but in a series of upcoming posts, we are going to look a little bit closer at the places that make this area so special…

First on the list is Avenue Restaurant & Bar who have recently introduced a new menu concept.

Avenue is opened for lunch and dinner Monday to Saturday, and brunch at weekends.

Once inside you’ll see it gives a nod to its St James’s roots with stunning art-focused interiors and a unique wine list. Originally designed by American architect Rick Mather in 1996, the interiors have been transformed by Russell Sage to give the feel of a glamorous space with eclectic modern art and design features. The 112-cover restaurant revolves around a spectacular central Decanting Bar, above which a huge illuminated chandelier sparkles with wine glasses – the perfect place for you to sit and soak up the buzz of the room with a glass of wine from the unique-to-the-UK wine access system Coravin.

We popped down to the venue to check out the much talked about new food and cocktail menu that features the explosive influence of modern Asian cuisine fused with a fiery South American twist, and here’s what we found…

Created by D&D London’s Executive Chef Mickael Weiss, the concept takes inspiration from the culinary regions that circumference the ‘Ring of Fire’ – the volcanic belt containing more than 75% of the world’s active and dormant volcanoes, stretching up clockwise from the basin of the Pacific to Alaska and then all the way down to South America, following the great Andes mountain chain. 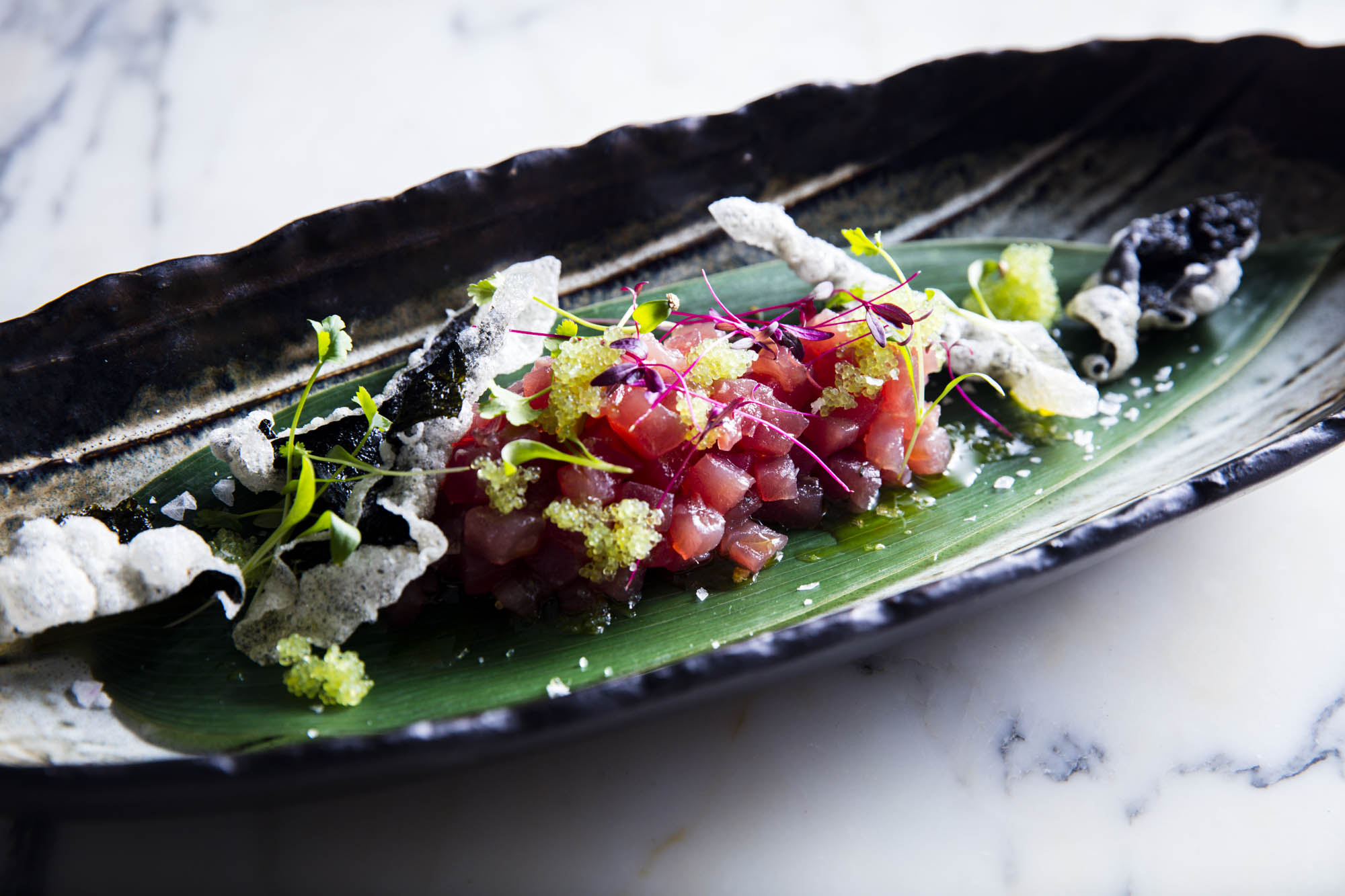 Utilising the highest quality, natural produce and resources, Weiss gives movement and vibrancy to the food; bringing energy, approachability & theatre to the restaurant. With Head Chef Andras Katona at the helm, diners can also expect a range of fresh, healthy dishes including; carpaccio, tartare, ceviche, poke & salads and the best quality fresh meat and fish on the grill.

The new cocktail menu has developed to complement the new dishes mirroring the new Asian and Latin food concept. The bar will focus on sustainable cocktail creation with Head Mixologist Davide Arcucci using a range of innovative techniques and unique ingredients such as tepache – a Mexican fermented beverage made from the peel and rind of a pineapple.

Half of the menu celebrates five mystical animals in Asian tradition that represent the cardinal points: the Black Turtle (North), the Red Phoenix (South), the Blue Dragon (East), the White Tiger (West), plus the Yellow Dragon (Centre).
Its great to see spirits such as the Japanese whisky Yamazaki, umeshu and Asian gin take centre stage, along with exotic ingredients like sake, matcha, yuzu juice and Lu Lu Tong, to create distinctive Asian flavours.

The other half of the menu is influenced by the classical elements of fire, air, land, water and aether, which feature heavily in the mythologies of the indigenous Inca, Maya and Aztec civilisations.
The South American flavours that shape these serves include mezcal, pisco and dark rum, as well as other local ingredients such as lime, jalapeños, pineapple juice and fresh avocado.

All in all in makes for some excellent cocktails and fine drinking experiences. Below is the full rundown so you know where to start when you get to Avenue…

In celebration of Quetzalcoatl, the most famous Aztec deity and known in many other Mesoamerican cultures such as Teotihuacan and the Maya, the god of knowledge and learning. Pisco Aba, Falernum, Verjus, homemade peppermint syrup and mint bitters, smoked with dry tarragon and applewood.

In homage to Chalchiuhtlicue, the Aztec goddess of water, rivers, seas and streams. Teh legend says that she only chooses one human every 10,000 years to handle the power of water and to help her look after everything within it. Copperhead Gin, Luxado bitter, yellow chartreuse and Verjus topped with Mediterranean tonic garnished with oyster leaves and lemon peel.

Influenced by Citlalicue, the goddess who created the stars, the Milky Way, Earth, devoted to be the connection between humans and the universe. Casamigos Tequila, Fernet Branca, lime juice and agave syrup garnished with purple shiso leaves and bush Peruvian leaves.

The zoomorphic incarnation of the Yellow Deity of the centre of the universe in Chinese religion and mythology. Nikka all Malt, umeshu liqueur, lulu tong syrup and lemon juice topped with Asahi beer foam with orange bitter and garnished with an amaranth flower.

Elegant and noble in both appearance and behaviour, representing the South and summer season, also known as the Vermillion bird of the South. It is said that if you were ever going to see one it would bring you luck in your life. Belvedere Vodka, homemade beetroot and raspberry shrub, champagne and matcha foam garnished with beetroot powder and served with dry ice

The king of the beasts who supposedly only appeared when the Emperor ruled with absolute virtue, or if there was peace throughout the world. According to Wu Xing theory, the white tiger became a mythological guardian of West Asia. Belvedere Vodka, sake, homemade oriental syrup, lemon juice and Bergamot bitters garnished with lemongrass and ginger.

Usually depicted as a turtle entwined together with a snake, it represents the North and the winter season and is said to be one of the four guardian spirits protecting the city of Kyoto in Japan. Hennessy Fine Cognac, sake infused with cinnamon, fresh apple juice, lemon juice and seaweed syrup garnished with mint leaves and dry lemon.