Here at CTC HQ we are always teaching ourselves about new cocktails and premium spirits to pair with our cigars, so we were thrilled to be invited to be one of selected few to take part in a special cocktail making competition with Old Forester, the oldest Bourbon on the market.

Being big fans of bourbon we jumped at the chance to create a twist on an American classic cocktail with a Cut The Cap twist.

The Briefing
We were introduced to a briefing at London’s Rev J Simpson cocktail bar where we learnt about the spirit, tasting notes as well as a cocktail masterclass from Stephanie who took us through how to make a bourbon smash as well as giving us ideas on how to infuse ingredients. 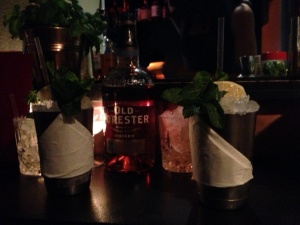 From there we were handed a bottle of Old Forester Bourbon as well as a cocktail making kit, and sent on our way to create a twist on an american classic cocktail.

The competition was to celebrate repeal day which if you are a fan of Boardwalk Empire you will know it was the day the reserved the rules on Prohibition.

The Concept
After absorbing everything that Stephanie said that night I began to think about what I would want from a cocktail. Naturally being able to smoke a cigar with it was my ultimate wish but I didn’t think I could get the laws changed to allow cigar smoking indoors (plus I didn’t have enough time)

I started to think about what cigar smokers love and one of the things I love about cigar smoking personally is that initial moment when you open a new box of cigars and you are hit with incredible smells from the cigars themselves (vanilla, leather, tobacco) as well as the cedar which creates an amazing bouquet of smells you just can’t get enough of.

This gave me the idea about re-creating that very moment in a glass. As a cigar smoker if I could order a cocktail that made me feel like I was opening a cigar box with every sip I would be in heaven.

The old fashioned is traditionally made up of a few key ingredients.

The Old Fashioned is a relatively easy cocktail to make, but the challenge was to see how Cut The Cap could put a stamp onto it and give it a twist.

Here’s how we did it:

The Bourbon
The bourbon is one of the oldest American bourbons and from a tasting I picked out hints of vanilla, caramel with a hint of spice. A cigar that pretty much gives me those flavours is a Montecristo Number 2. Not only is it one of my favourite cigars but it’s a versatile cigar enjoyed by newbies and experts alike.

I then took these caps, opened them up and infused them into Old Forester by pouring both ingredients into a sealed container (couldn’t find any bottles) 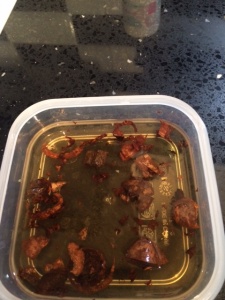 I left the bourbon for around 5 days to infuse in a cool dark place. After I had infused it, I could see the bourbon turning slighter darker which meant it was working.

After 5 days I filtered the tobacco leaves out and poured the infused Old Forester into a bottle.

Sugar Syrup
Sugar syrup is a key ingredient of most cocktails. Available to buy pre made or very easy to create at home by using 1 part water and equal measure of sugar.

When we were at our briefing Stephanie took us through some of the infusions she had created and it gave me the idea to create my own infused sugar syrup.

Coming back to the instant smells you get when you open a cigar box, the bourbon provided the smell of the cigar so now I needed the cedar notes that comes with cigar boxes.

I boiled the water, added sugar, and then went back to the Montecristo box and took out some cedar and broke these down into strips.

Once the sugar syrup was ready I added the cedar strips into the pot, stirred and left to cool down. 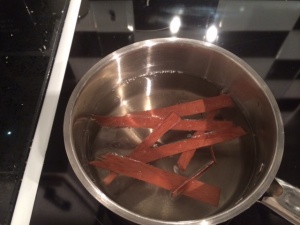 I must admit this was an infusion I didn’t even think would work, however I noticed the water turning a really nice rose colour (ITS ALIVE….ALIVE)

Now my sugar syrup was ready.

The Cigar Club Old Fashioned
Now it was time to bring my creation alive. Firstly I threw in a few dashes of Angostura bitters along with 2 spoons of cedar sugar syrup into a glass. Now it was time to add in a measure of Montecristo infused Old Forester with some ice cubes and stirred.

Then more infused Old Forester and repeated. Finally topped it off with a few more ice cubes and voila. the creation was complete. 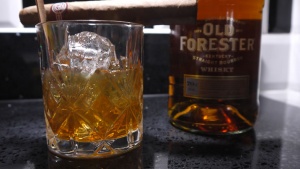 Normally with Old Fashioned cocktails its custom to add a orange zest, however I didn’t want to take away from the cigar and cedar notes.

Presentation
To decorate the cocktail and make sure the cedar notes came through I added one more strip of cedar.

To really convey that cigar box opening experience, I presented the drink in an actual cigar box, and added those cigar leaves I used to infuse the Old Forester. (You didn’t think I would waste those did you?)

I shredded them down more and sprinkled them around the box to really create that cigar box smell.

And there you have it: The Cigar Club Old Fashioned 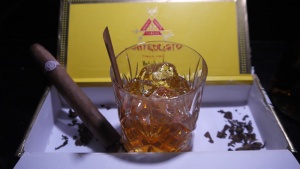 To finish off the presentation, I presented the drink along with a Montecristo Number 2, which if drank outside can be lit to enjoy along side the cocktail, however if you are inside you can just enjoy the smell from the cigar as you sip on your Old Forester Cigar Club Old Fashioned.

Give it a try at home and let us know what you think.

Old Forester is available from Masters Of Malt and is priced at £33.95