One of our favourite films of 2014 has just released a trailer for it’s upcoming sequel and we are very excited. Keanu Reeves is back as John Wick in John Wick: Chapter 2 which is scheduled for release next Feb.

For those that saw the original the film followed John, a retired assassin forced to pick up his guns after some gangsters kill his pet dog. yes you heard right his dog! And although on paper that story line sounds like a Saturday Night Live sketch, it was a sleeper hit and pretty much re-launched Keanu Reeves career. 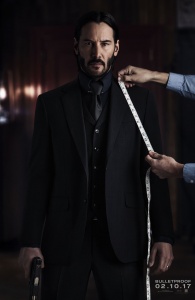 The sequel seems to pick up where we left John Wick and continue the story of him and his kick ass skills but taking him to even more luxurious locations.

What also does it for us is seeing the reunion of Keanu and Laurence Fishburne.

If the first film was anything to go by, we are very excited about this.