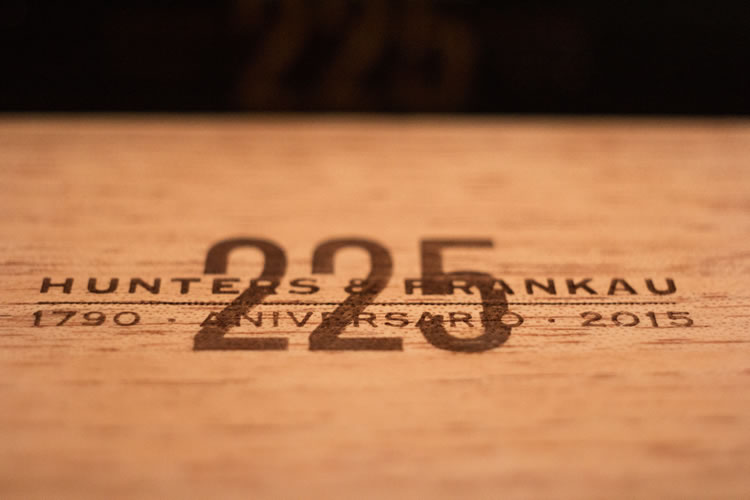 Friday 19th June saw one of the biggest dates in the Cut the Cap Calendar, apart from it being a Friday there was something even more special happening.

It was the Hunters & Frankau summer party to launch the Ramon Allones Anniversario 225 cigar. 225 years in the business is a pretty good time to launch a cigar and what better way than using Belgrave square and hosting a party that would make any cigar smoker jealous.

On entry we were handed a Hunters & Frankau branded welcome bag, which contained 4 cigars, 2 of which were in a beautifully created numbered presentation box.

The cigars in question were of course 2 of the Ramon Allones 225th anniversary cigar which we were here to celebrate as well as 2 x Bolivar Belgravia Exclusivo Gran Bretana, a Regional edition which is yet to launch here in the UK.

But it didn’t stop there! We were also presented with 2 trays, 1 containing a H.Upmann Magnum 50 and the other offered the brand new Montecristo Media  corona – a lovely extra surprise. The Media Corona has been on the cards for a while now and we have been eagerly awaiting its arrival. Measuring in a 3.5 inches with a 44 ring gauge, this cigar is perfect for the UK weather.

Flavours you can expect from the Montecristo Media Corona include coffee, cocoa beans, pepper as well as orange peel. As soon as we get ur hands on some, we’ll be sure to post a review.

The event brought together cigar smokers, retailers and the crème de la crème of the cigar world together.

Food stations offered carved beef, oysters and more canapés than you can shake a stick at, ensuring guest bellies were filled.

We found ourselves gravitating more towards the Havana Club tent which offered cocktails and later that evening offered unlimited serves of the specially created Havana club Hunters & Frankau edition which is unavailable to buy as it comes with the special humidor which is for sale. You can find out about that here.

Guests were welcomed by Jemma Freeman and David Lewis who gave a fascinating speech on the history of Hunters & Frankau. They also welcomed Asbel, Morales, Master Blender for Havana Club who also came to the stage to say a few words. The speeches came to a close with Edward Sahkian (owner of Davidoff of London) making a toast to Hunters & Frankau

With such an amazing stage full of speakers, the best way to describe how we felt was like a teenage girl seeing One Direction live for the first time. We were in the presence of Cigar and Rum royalty and it was an honour to be part of the magical evening.

Once the speeches were over it was time to light our cigars. Fighting all our urges we decided to keep the Ramon Allones Aniversario 225 cigar for another time and light up the Bolivar Exclusivo Gran Bretana.

The Bolivar Belgravia Exclusivo Gran Bretana cigar measures 5.25 inches with a weighty 55 ring gauge. A full flavoured cigar, this vitola has all the mature characteristics of a Bolivar cigar. The smoke was very smooth and had incredible flavour. 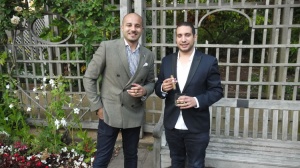 As the band played on we sipped on some fine cocktails we wondered back over to the Havana Club tent to find they had opened a bottle of Havana Club Maximo (can this evening get any better?)
We were lucky enough to get the last pour from the bottle which we savoured with the Bolivar before switching back to the specially created Hunters & Frankau Anniversario 225 Havana Club. With only 500 bottles created from selected vintage casks, it was a very impressive spirit. The Havana Club is unavailable for purchase, however we are told that if it was it would be priced around £300.

We managed to grab 5 minutes with Asbel Morales at the end of the evening and had a chat about some of the great rum that Havana Club produce. He even let us have a picture. (Top Man). 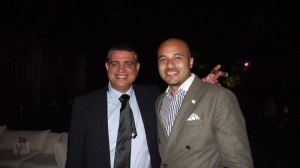 Within the event a Hunters & Frankau tent showcased the humidor in question – the reason we were all there. With only only 225 specially created humidors they have now sold out, so these are certain to become a collectors item. Each cabinet is numbered and were manufactured in Calvenzano, near Milan by DeART S.r.l, and it’s apparent that no expense has been spared in giving the Ramon Allones Anniversario 225 a beautiful home.

As the evening wound down to a close, we could feel nobody wanted to go home, but it was time to pack up what was left in our goody bag, say goodnight to everyone and head home, but not before stopping by Simon Bolivars statue for a quick moment to pay respects and take in what an amazing event we had experienced.

The event was without doubt one of the best cigar events we have ever attended and this is testament to the hard work Hunters & Frankau do to ensure only the best of the best Cuban cigars touch our shores.

The Ramon Allones Aniversario 225 cigars are in limited supply but check out CGars to get your hands on what’s left. . They measure in at 5.5 inches with a 50 ring gauge. We didn’t actually end up smoking them on the evening but have them resting comfortably in the humidor ready to be smoked.