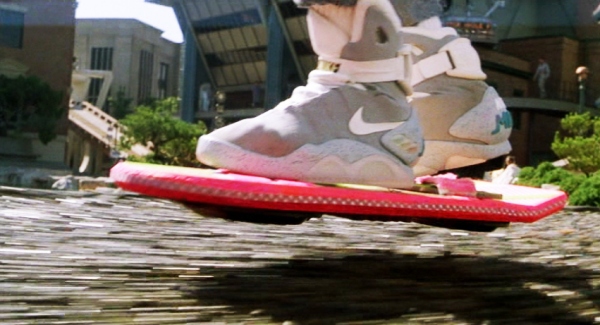 I’ve just received news that Mattel have announced that the iconic hover board from Back to the Future Part II is to be finally released in the real world.

However before we all rush off to café 80’s to celebrate with a Pepsi and play video games with a young Elijah wood. The self balancing scooter won’t actually hover, however Toy Fair claims that the pink boards are “movie accurate” and that it will “glide on most surfaces”.

Digital spy is reporting that the limited edition item will be available for pre-order from March, and will be shipped in time for the holiday season later this year. A price has yet to be confirmed for the boards.

There were rumours that back in the day the Hoverboards were actually real but parent groups campaigned against them as they believed they were too dangerous. (maybe they are without a funky 80’s soundtrack to skate to)

“Because this is such a high-cost item, there will be a minimum number of orders required to go into production,” Mattel said in a press release. “If we don’t receive the minimum orders, we won’t go into production and customers will not be charged. The price will be announced later this month.”

Looks like they’ve seen how successful the trainers were last year that were auctioned for charity, and want to cash in on the desperate, crazy Back the Future fans (that being me)

Watch this space for more info, or just jump in your Delorean, go forward in time by a month or so and then make your order.

Let’s hope they are affordable and are available in the UK this time.