It’s only been a long 20 years of waiting but now, finally the trailer for the 2Pac biopic movie has finally been released.

All Eyez On Me originally titled Tupac, is the upcoming American biographical drama film directed by Benny Boom, starring Demetrius Shipp, Jr.  as a spitting image of Tupac Shakur

The film chronicles his life all the way until that fateful night on September 7th 1996 when 2Pac was gunned down in Las Vegas. 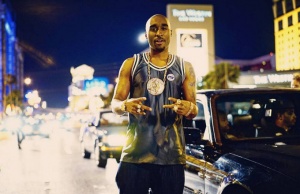 The trailer looks like a pretty decent movie and I can’t wait to see what they have done with it. I grew up as a massive 2Pac fan and when I heard there was a movie being planned I was a bit skeptical of it. However after watching Straight Outa Compton I feel we are ready for a proper gritty look into the world of 2Pac Shakur.

Till this day we still don’t know who killed 2Pac Shakur, so let’s hope this film re-ignites our need to know who did do it.

Have a watch below and let us know what you think. A UK release date is yet to be scheduled.