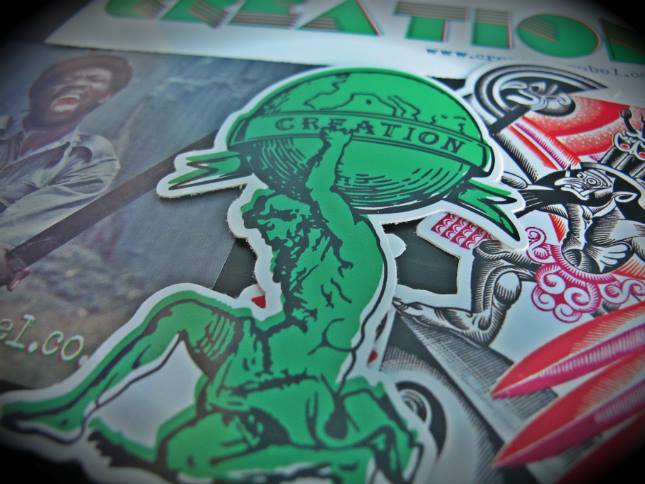 Mark it in your diaries fashion people of the Internet… December 1st sees Creation – the new clothing label from two respected veterans of the UK Streetwear scene, Emmet Keane and Paul Sid – launch its second release! It will comprise of high quality graphical t-shirts and sweaters in limited numbers.

Not up to speed just yet? Well… remember you heard it here first! Creation is set to be one of the most respected labels in contemporary Streetwear. Drawing insight from a wide range of artistic and musical influences…… inspiration is never far away.

Emmet was the co-founder of renowned label Answer along with Mo’ Wax and Honest Jon’s label designer Will Bankhead.  Paul Sid is the founder of cutting edge innovative clothing label Retreat.

Both labels were heralded globally for their progressive, non-conformist thinking regarding design and attention to detail.

Friends for many years, and sharing a mutual interest for art and music, what started off as a light hearted dialogue in late 2013, quickly grew in momentum, when realising that by pooling their vision and love of strong graphics, could amount to a t-shirt label that is unparalleled with what is being offered in today’s market. 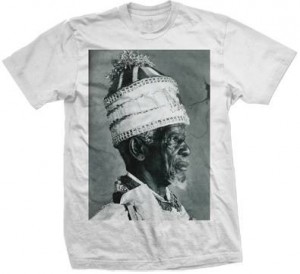 We caught up with Emmet to get a brief history of his involvement with ‘Park Walk’ and ‘Answer’ and here’s what he had to say.

Emmet can you give us a brief history in your involvement with Park Walk and later Answer?

I used to help Will Bankhead distribute Park Walk in the UK. After a while we decided to set up a UK branch of PW initially using three iconic Vaughn Bode images, Cheech Wizard, Lizard and Cobalt 60. When Will decided to shut down the Park Walk operation in Japan, we set up Answer.

Can you tell us more with your involvement / friendship with James Lavelle?

I met James Lavelle at a club when we were both DJing on the same night. We talked about music, comics and toys for hours. At the time I was working for a Toy / Comic distributor and began to source rare stuff for James and then Futura 2000 and Nigo. Through James I met the whole Mo Wax crew and became good friends with them all.

How did the collaboration with A Bathing Ape come about?

When we did the first Bode shirts under the Park Walk label, my friend Toby Feltwell (Bape / BBC / Cavempt) was on the shoot of Pharrell’s video ‘Frontin’ wearing one of the shirts. People went crazy about them and Nigo requested a set. Quite soon afterwards we discussed the possibilities of doing a series of Bode shirts together and worked out the imagery. We did 10 images I think, with a run of 300 per design. These were the first time we used the Answer name and it really helped the launch of the brand.

In your eyes what separated Answer from all the other brands that were around at the time?

Well…commercial sales and making profits were very low on Answer’s agenda. We released designs that appealed to us rather than looking at what type of designs were in vogue. We basically made the kind of t-shirts that we wanted to wear ourselves.

All our shirts were hand printed, using large prints on the shirts whereas everyone else were using small prints at the time. To be honest lots of labels were just copying what each other were doing, we never considered ourselves to be part of any kind of streetwear scene. Everything we did was done on a limited edition basis and we were very careful on which shops we sold to.

Once Answer came to an end did you continue a career in ‘Street wear’?

For a very short time, I helped distribute Reigning Champ and Wings & Horns in Europe for a bit. I just got totally sick of the industry. I took a couple of years out to look after my daughter and began to study part-time for a degree in history which was something I had wanted to do for years but never had the time. I have zero interest in the street wear scene and have absolutely no idea what is going on in that world.

Can you explain how Creation came about?

I was approached out of the blue late last year to do a collaboration with a label. I wasn’t keen to enter that world again, but said I would source some graphics that they could use. Once I started digging for imagery I soon had masses and masses of incredible stuff. Anyway in the end none of the images were used as they weren’t really suitable for the label. I’ve known Paul Sid who runs the label RETREAT for years and I fired him over some of the images to see if he wanted to use any. Paul really liked them but again felt that they wouldn’t fit with what he was doing. Anyway, I really believed that graphics would make amazing t-shirts and suggested he set up a sub label of RETREAT to use them. We talked back and forth for a while and through our conversations the idea of doing t-shirts again began to grow on me, especially with Sid as a business partner.

Will there be any comparison between Answer and Creation?

I don’t really know, I guess it’s inevitable that some people will make a comparison. Sid and I share the same ethos on what we want Creation to be, this is more or less the same as what Answer was. Limited edition hand printed shirts, the kind that we would want to wear ourselves without being commercially motivated. I’m still am obviously graphically influenced by many of the same things as I was then, but Creation is a whole new thing.

Which artists (old and new) would you be keen to work with?

We hope you’ve enjoyed this insight to the world of Creation, if you want to find out more or order some of their great products check out www.creationrebel.co.uk