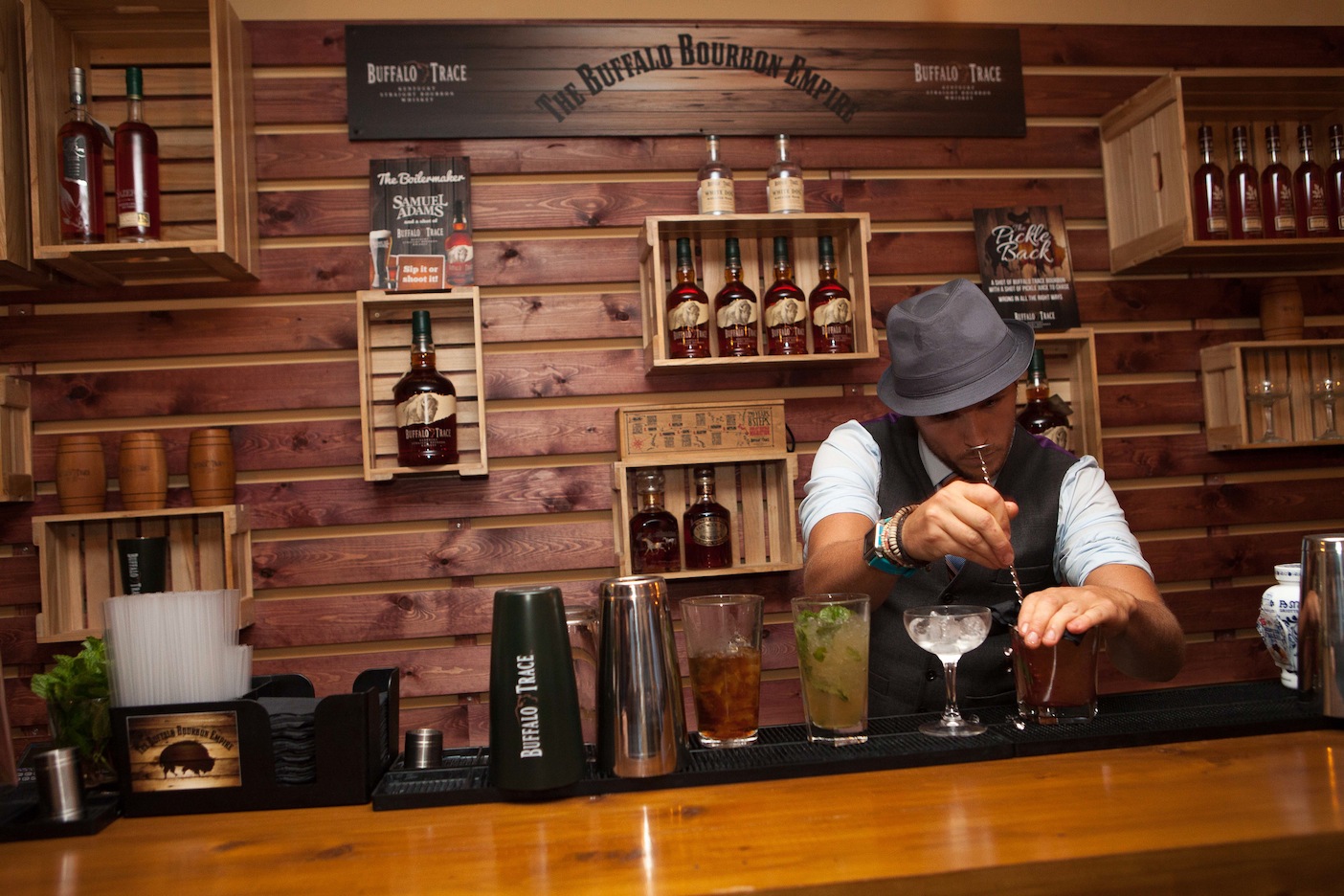 When we found out Buffalo Trace bourbon whiskey was giving us a taste of the prohibition era, we couldn’t believe the luck we were having. London Cocktail Week, RumFest 2012, AND a whiskey bar dedicated to the finest bourbon cocktails made by the finest mixologists known to man?

We quickly signed up to the molecular mixology master class given by a master mixologist and made our way down. The master classes are a really good way to learn about making cocktails. Even if you don’t enjoy a whiskey straight up, we’re sure there’ll be a cocktail out there for you. A favourite with non-whiskey lovers seems to be the Sours which actually has very little whiskey flavour but just enough to know what you’re drinking. For those really keen on bourbon, there’s also new techniques you’d learn like smoking the whiskey which really adds huge depth to the drink. We don’t want to go too much in to the master classes as we’d love you to attend one of these and see for yourselves the fun you can have. Also, the alcohol-fuelled classmates tend to make it a great social event so don’t worry if you haven’t been able to get anybody to go along with you. Just GO! It’s great fun, trust us.

Following the master class, we decided we’re actually a fan of the american whiskey drinking method so we went for the ultimate way to enjoy bourbon. The Boilermaker. A shot of bourbon and a Samuel Adams. We love that this is paired together. Despite the fact that it is a very American ‘thang’ it should really be a more common occurrence here in the UK.

So shot taken, Sam Adams enjoyed, what next? One of the many cocktails of course. We went for the Manhattan and the Raspberry Fizz. Bourbon twists on some great cocktail classics. And the master mixologists behind the bar do an excellent mix. There’s also other classics such as the Mojito prepared with Buffalo Trace and such but unfortunately after RumFest we were all mojito’d out. That’s ok, though. There’s more than enough choice on the menu and there’s something for everybody.

The twist with Buffalo Trace’s Buffalo Bourbon Empire pop-up bar is that it’s prohibition-inspired meaning not only can you get yourself some good old American bourbon, you can enjoy the 1920’s surroundings while shooting some craps in the basement. The winner of each day get’s put in to a prize draw for a bottle of Buffalo Trace and the chips are completely free so why not get on down and try a hand? We got some practice before we start planning our next trip to Vegas and finished as the day’s highest winner on $4980. Let us know how you get on in the comments below.

The Buffalo Bourbon Empire pop-up bar will be open until the 26th October (next friday) at 34 Tavistock Street, London WC2 so get down there quick before you miss out on a real cool bourbon bar and your opportunity to experience prohibition style drinking. To get on the guest list (it is a small venue with a lot of visitors so highly recommended!!) email guestlist@buffalobourbonempire.com. Don’t say you haven’t been warned!