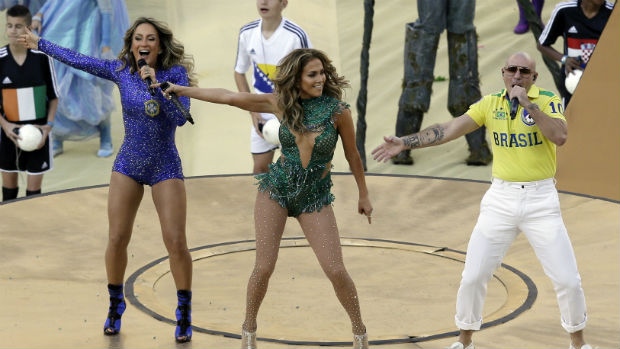 Well what an evening that was! Last night Pitbull, Jennifer Lopez and Claudia Leitte took to the stage for the opening ceremony of the FIFA World Cup 2014 to perform their official track We Are One.

After rumours that Jennifer Lopez pulled out due to production issues, she did turn up and wowed the crowd with their performance of the official track, however one thing was apparent in that there was some production issues.

We couldn’t hear them or the music and it felt like they were singing to a different beat to what we were hearing.

What did make a splash was Pitbulls tight white trousers which seemed to have shrunk. Pitbull aka Mr 305 is a dapper dresser but perhaps on this occasion he should have opted for a signiature bright suit.

Can’t say we have ANY complaints with Jennifer Lopez and Claudia Leitte’s outfits….not even one 🙂

There seems to be no videos online of the performance but we managed to find this so watch it while you can.

And here’s how the song should have sounded:

Previous to the World Cup opening ceremony, Jennifer Lopez appeared on Late Night With Jimmy Fallon for a skit about tight white pants…was she psychic?