Welcome To No Vacancy at the Hotel Juniper, for the past six years one of the bars to visit in Hollywood. Cut The Cap was lucky enough to spend some time with James and Tony before the night got into full swing, and learnt about this special place from those that know it best…

Upon entry (which is an experience in itself and one we’ll leave for you discover), what is immediately striking and impressive about this bar is the feeling of history it exudes. The name is a throwback to its former days as a hotel, and with this age and history, as James said, ‘it brings a splash of culture to the cocktail community’.

But this is not just a cocktail bar, it’s not even just a speakeasy, it’s a whole pre-prohibition experience. The Victorian building is home to a bar built from deeply coloured woods, and as you look around your eye will catch plush red velvets, oriental rugs, and leather furniture all adding to the feeling that you’ve just travelled 117-years back in time.

Unlike many speakeasy bars or those with secret entrances, No Vacancy has a surprising amount of space – the bar area itself has cafe-style stool seating at the bar, a private table area upstairs and a garden-style courtyard illuminated with string lights looping across the way ready to host a wild 1920’s Hollywood party long into the night!

Fun fact – the building that No Vacancy resides in used to be on Hollywood Boulevard, originally built in 1902 (hint: remember this number if you go) but it moved lock ‘n’ stock in the 50’s. Like we mean everything… as Hollywood was expanding the building was jacked up on stilts and moved to its current location on Hudson Avenue. Oh and it used to be home to Charlie freakin’ Chaplin!

After soaking up the atmosphere for a while it was time to sample the cocktail menu – this is after all what No Vacancy is famed for and why its the choice of bartenders and punters alike.
In keeping with the Juniper Hotel name, gin is heavily featured in the menu and where applicable Fords Gin was used on our drinks. 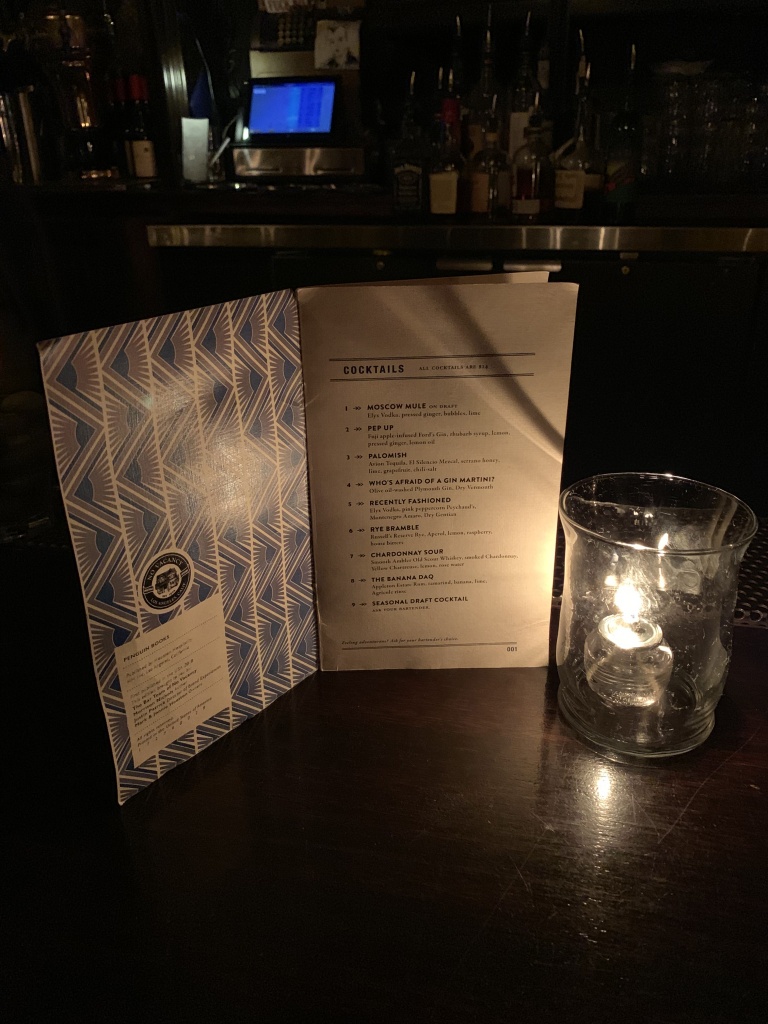 We drank the Rye Bramble, the Banana Daq and Cucumber Collins (the latter being one of Tony’s ‘see what happens when I do this’ drinks).
Genuinely each of these drinks was superb –  amazing amounts of flavour coming through, all perfectly balanced making each sip more pleasant than the last.

If you’re feeling brave you can ask for the secret menu cocktail, the “Lady Jane”. Before No Vacancy was No Vacancy the property was known as Jane’s House and this punch bowl cocktail is a homage to Lady Jane the madam of the house. Rumour has it that there is a history of an entity that ‘haunts’ the premises, so much so that ghosts tours often spend time outside trying to track it/her down.
For those that work there though, Lady Jane (spirit and punch bowl) are there to help facilitate and host the coolest party in Hollywood, bringing a class and experience that the Lady of the house would want…

We had a great time at No Vacancy so if you’re in LA make this bar a priority!

And now a word to the wise – as with all bars of this nature you have to play by the rules. In this case, looking the part is important – no bags or hats (minus a few exceptions), no sportiness, or shorts. The party kicks off late so make sure your on the list and if that’s not possible best to get there with time to spare and be at your most charming and dapper when it comes to speaking with the doorman.