The second part of our exposé on St.James’ takes us down St.James’ Place to Dukes bar…

Afternoon tea. It’s good isn’t it? That cessation of the temporal, that harking back to a P.G. Wodehouse world where concerns don’t rank much higher than whether the scones have been done in the Cornish style – cream over jam – or the Devonshire style, the opposite.

Office workers don’t do afternoon tea – fika doesn’t quite extend that far, and even the hygge-ing Danes haven’t cottoned onto our great tradition. It is a luxury, a pursuit of the happily idle, of the Bertie Woosters of this world – or the people playing at being Bertie, if only for the day.

Cigars, similarly, are not the pastime of the office worker – your boss probably wouldn’t take too kindly to you nipping out for a Partagas Presidentes on the hour, every hour, not least because you’d be a little grey in the gills and never at your desk – so there was an immediate kinship when Cut the Cap arrived at that most Woosterian of hotels, DUKES London tucked cosily away in St. James’ Place, to sample their new MarTEAni afternoon tea. 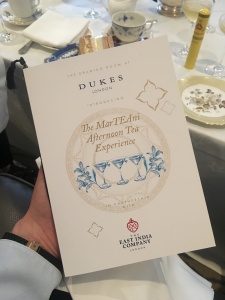 We’ll pardon the name (although one does wonder this type of punnery has any place in such a storied hotel) because it points to the speciality of the house, and that which we would be served alongside our Coronation Chicken sandwich fingers and raspberry vol-au-vents.

Now we have nothing against the tea that, after all, gives afternoon tea its name. The exotic Darjeeling, the flash-of-ankle sass of a cup of Lady Grey, even the Laphroaig-evoking smokiness of the lapsang souchong – all have their time and place. But when you arrive at DUKES, the body starts to cry out for one drink, and one drink only: a martini.

Here it was, after all, where Ian Fleming sat, probably huddled over a glass of the stuff, that Amalfi coast scent of lemon oil teasing his nostrils, fleshing out the complex character of James Bond, his punk spy who would order a bashed and bruised vodka martini just to piss off the locals (gin is the traditional spirit base).

It’s not hard to imagine Bond pulling up in the courtyard at DUKES in his Bentley 4½ Litre (do not protest, and do not mention the words Aston or Martin, the letters DB or the number 5), gliding through the front doors and glancing right and into DUKES’ tiny, yet perfectly formed, bar. 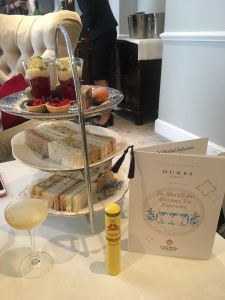 So martinis it was, and we were in luck, because there are three of the blighters included in the DUKES MarTEAni Afternoon Tea, served not in the bar but in the hotel’s Drawing Room and Conservatory; mini martinis, we grant you, yet all designed to complement our tiered selection of escapist delights.

Here, the details go a little fuzzy, for when one communes with a DUKES-made martini, one knows one’s been communed with (the main bar has a bylaw of two martinis maximum for clients, otherwise street furniture has been known to be interfered with).

Snapshots return. The gorgeous, NSFW naughtiness of the dark chocolate duomi that capped off the food selection.

And with a little more effort…

Of Alain, the barman envoyed from the East India Company (they who supplied the very fine gin for the proceedings) managing to pour some pink creation over Cut the Cup, break the pink creation’s associated champagne flute into our cucumber sandwich, and yet still carry it off with enviable charm and grace.

And the horror (there is no other word) of seeing 10, maybe 15 glasses of the world’s finest martinis, left by members of the UK’s more esoteric publications, tipped into a champagne bucket by DUKES’ ebullient Head of Sales Hubert and carted away, a single solitary tear slipping down his face (we’re imagining the last part). The press really can be philistines when they put their backs into it.

After it was all over, and we’d enjoyed a tour of DUKES sumptuously refurbished GBR bar and restaurant in the hotel’s basement, Cut the Cap retired to the courtyard (the hotel has a cigar lounge, but it only opens at 6pm) to light up – one Montecristo Petite No.2 and one Hoyo de Monterrey Epicure No.2, served alongside a fine pair of negronis – and reflect on a day well spent. Afternoon tea mixed with martinis? It’s so simple, it’s genius.