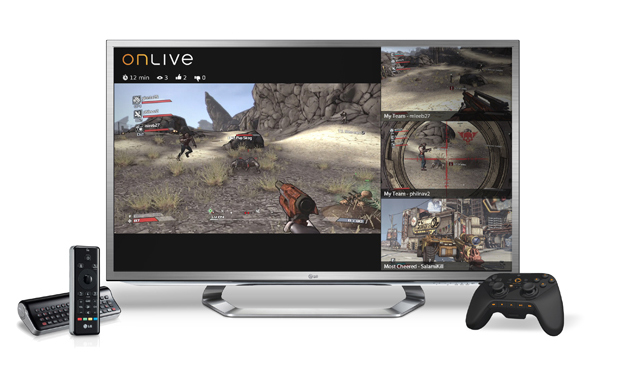 If you were lucky enough to be at a) E3 and b) OnLive’s Booth in Los Angeles, you would have seen them showcasing a broad range of new video games as well as breakthrough new features in Game Services on the next-generation LG Smart TV with Google TV (G2 Series) from LG Electronics.
Capitalising on the power of LG’s L9 dual-core processor, the service will make hundreds of top-tier video games from more than 60 publishers playable on-demand, without a console or PC.
When the service becomes available, LG G2 TV owners will also enjoy free instant access to exclusive OnLive social features such as worldwide massive spectating, the brand-new OnLive MultiView spectating capability, Brag Clip™ video recording and Facebook sharing. There will also be select 3D games, using the popular LG CINEMA 3D glasses, in the planned software update.

With just a few taps of the Universal OnLive Wireless Controller or any compatible game controller, LG G2 TV owners will be able to jump in and play OnLive’s growing library of hundreds of top-tier, console-class video games on-demand. Instant demos are available for nearly every game so players can experience up to 30 minutes of each game free before deciding what to buy, and then continue playing where the demo left off.
Can’t say fairer that than now can we, well played OnLive, well played!

Oh and they also mentioned that the following games are on the way: